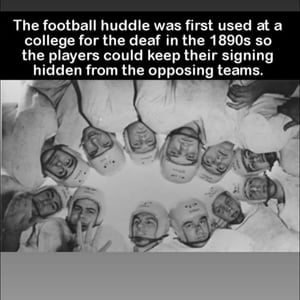 National Deaf History Month is celebrated from March 15 – April 15. It recognizes contributions of deaf and hard of hearing (HoH) people, as well as highlighting the various forms of communication chosen by deaf and HoH individuals – including American Sign Language (ASL). For example – did you know that the football huddle we use today was first started at a college for the deaf in the 1890s so the players could keep their ASL signing hidden from the opposing team?

March 13, 1988: The Deaf President Now movement succeeds in having I. King Jordan named the first deaf president of Gallaudet University. Dr. Jordan became known as a symbol of self-determination and empowerment for deaf and hard of hearing people around the world.

April 8, 1864: President Abraham Lincoln signs the charter of Gallaudet University in Washington, the first school for the advanced education of the Deaf and hard-of-hearing in the world.

April 15, 1817: The first permanent public school for the deaf, the American School for the Deaf in Hartford, Connecticut, opens.

Nyle DiMarco – The first deaf winner on America’s Next Top Model and Dancing with the Stars.

Juliette Gordon Low – The founder of the Girl Scouts.

Derrick Coleman – Legally deaf by the age of 3, he became the first deaf offensive player in the NFL and played for the Seattle Seahawks including the XVLIII Super Bowl.

Jane Lynch – Famous actress known for her starring role on the hit TV series “Glee”. She is deaf in one ear.

Holly Hunter – American actress who starred in The Piano for which she won the Academy Award for Best Actress. She received Oscar nominations for her roles in Thirteen, The Firm, and Broadcast News. She’s also received two Emmy’s and six Golden Globe nominations. Hunter is profoundly deaf in one ear from a bout with mumps during childhood.

Stephen Colbert – An American comedian, actor, author, and host of the Late Show. He is deaf in his right ear.

Ludwig van Beethoven – Was completely deaf for the last part of his life and yet managed to produce some of the greatest music of all time.