Earbuds, Music and Your Teen 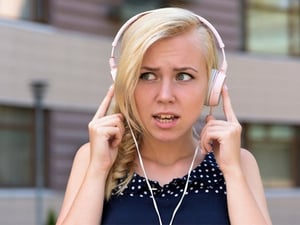 Today, with the popularity of earbuds and other personal listening devices, it’s hard to know if your child or teenager is listening to music at a safe level. Back in the day, when stereo speakers were common, it was easier for parents to know how loud their children were playing music.

I remember, as a teenager, my parents would holler at me to turn down the loud music I would blast in my bedroom. At the time, some people believed rock ‘n roll was the main cause for concern, but, actually, any music genre – hip hop, country, classical, etc. – can damage hearing when  played too loudly. Hearing loss caused by loud sound, also known as Noise-Induced Hearing Loss (NIHL), is permanent.

Any sound that causes even a temporary ringing in the ears (or head) – tinnitus – can be a sign of potential permanent noise-induced hearing loss.

Luckily, NIHL is 100% preventable. Our sense of hearing should last a lifetime, so it’s important that we do everything we can to limit potential hearing damage.

With children and teens, keeping it simple is often best! Here are three talking points to discuss with your child, and three general recommendations to help prevent noise-induced hearing loss:

Talking Point #1: How Loud is the Music?

Loudness is measured in decibels. The higher the decibel number, the louder the sound, and the greater the potential is for damage. One really loud sound like a firecracker going off near someone’s head can cause the same hearing loss as working in a factory for 10 years.

If someone is about three feet away and can hear music from an earbud, it’s probably too loud. Conversely, if the music listener cannot hear and understand conversational-level speech from a person three feet away, it’s too loud.

Talking Point #2: How Far Can You Hear Your Child’s Music?

Sound attenuates, or reduces, over distance. In open rooms, sound can spread out so it does not reverberate back. For this reason, outdoor concerts are generally safer than indoor shows. Earbuds are tiny powerful speakers worn IN THE EAR, lowering the possibility for sound to escape or dissipate.

Some kids report they need to increase the loudness of earbuds when they are in noisy settings. Generally, noise-canceling earphones help keep out unwanted sound, allowing for the listening level to remain at a safe level.

In addition to noise-canceling earphones, many devices have output/loudness limiters that can be set by a parent. The downside, however, is that tech-savvy teens can likely figure out how to disable it.

Talking Point #3: How Long Has Your Child Been Exposed to the Loud Music?

The louder the sound, the shorter the safe listening time. Some personal listening devices can reach unsafe listening levels similar to an indoor concert.

The volume dial on your child’s listening device should not exceed 60 percent, and should be listened to for no more than 60 minutes.