The outer ear is what most people consider “the ear.” It consists of a flap of skin/cartilage (called the pinna or auricle) on the outside of the head. It collects sound and directs it into the ear canal. The ear canal is a closed tube with hairs and “wax glands” in the outer portion. Our ear canal is self-cleaning. The wax glands produce wax, or cerumen, and the tiny hairs push the wax out of our ears. As the wax moves out of the ear, it cleans the ear canal and keeps unwanted critters, such as insects, out of the ear. At the end of the ear canal is the eardrum, or tympanic membrane. When air moves it creates vibrations. These sound vibrations are collected by the pinna and directed into the ear canal, to the eardrum, causing it to vibrate just like the head of a drum when you hit it with a drumstick. When an audiologist or physician looks into a healthy, unobstructed ear with an otoscope, s/he can see the outer surface of the eardrum. 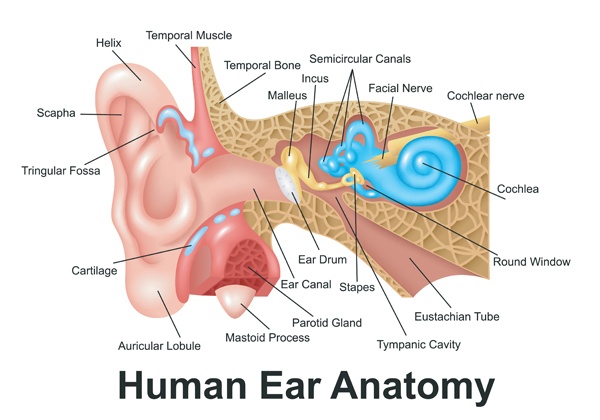 The middle ear is a small, enclosed space that contains three bones called ossicles. The ossicles are the smallest bones in the body. Each is connected to the other, creating a chain that is attached to the inner side of the eardrum on one end, and to the cochlea on the other end. As the eardrum vibrates from the movement of air (sound waves), so do the ossicles. When someone has an ear infection, it is possible that fluid has built up in this middle ear space around the ossicles causing pressure and pain. When this happens, the ossicles do not vibrate the way they should, and the person may experience hearing loss.

At the end of the middle ear bone chain is the bony, snail-shaped organ for hearing called the cochlea. Inside the cochlea are tiny nerve endings, or hair cells, that are surrounded by fluid. As the ossicles vibrate, they push in and out on the end of the cochlea and cause the fluid to move in waves. These waves cause the hair cells to bend. Every time a hair cell bends, it sends a message along the hearing nerve up to the brain. The brain then interprets this nerve impulse as sound.