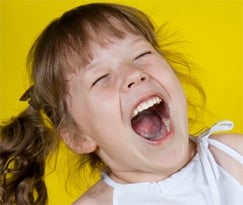 Many kids have a hard time producing the “R” sound, even after participating in years of traditional therapy. It’s not their fault – some kids just don’t respond well to traditional speech therapy. In these cases, recently developed technology called visual biofeedback could be the solution. Two effective visual biofeedback options are SmartPalate and OptiSpeech.

Children who struggle to make certain speech sounds past early childhood may have a “persistent speech sound disorder.” While children are usually expected to develop the “R” sound by the time they are six-years-old, some children develop it by age eight without need for therapy.

Why is my child struggling with the “R” sound?

From a speech-language pathologist’s perspective, making an “R” is tricky! This may be one of the reasons why children continue to struggle with this. To produce “R”, multiple areas of the tongue work together, along with the voice and the muscles of the throat.

In either case, the tongue is concealed in the mouth and partially hidden by the teeth and lips.  This means children cannot see the exact tongue shape by observing another speaker or looking in the mirror.

What is traditional therapy?

Some children who have not mastered “R” between ages six and eight can benefit from traditional speech therapy.

Traditional therapy should also address phonological awareness, the skill which helps children determine when they need to produce the “R” sound.

It is generally less expensive and more widely available than visual biofeedback options, so therapists often recommend it first.

In these cases, there are some technological solutions that could supplement traditional therapy methods. Visual biofeedback is a type of technology that can show children their tongue position and/or tongue movement on a computer screen. This means that they don’t just have to rely on auditory (how the word sounds) and somatosensory (how the tongue feels) feedback – they can also use visual information to change their tongue position.

The SmartPalate System by Complete Speech is a retainer-like device children can use to see (not just hear and feel) their tongue movements. Using a computer screen, the SmartPalate shows where the tongue touches the palate in real time in two dimensions.

Opti-Speech allows the client to see a realistic visual of his/her tongue moving in real time in three dimensions. Clients wear small sensors on the tongue while participating in this treatment.

Costs and benefits of specific visual biofeedback programs can vary from person to person, and a speech-language pathologist can help families choose the best option for them.