What is a Speech-Language Disorder? 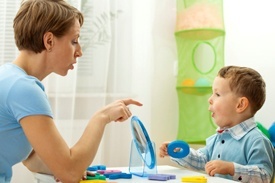 A speech disorder is an impairment of the articulation of speech sounds, fluency and/or voice.

An articulation disorder is the atypical production of speech sounds characterized by substitutions, omissions, additions or distortions that may interfere with intelligibility.

A fluency disorder (stuttering) is an interruption in the flow of speaking characterized by atypical rate, rhythm, and repetitions in sounds, syllables, words, and phrases. This may be accompanied by excessive tension, struggle behavior, and secondary mannerisms.

A voice disorder is characterized by the abnormal production and/or absences of vocal quality, pitch, loudness, resonance, and/or duration, which is inappropriate for an individual's age and/or sex.

A language disorder is impaired comprehension and/or use of spoken, written and/or other symbol systems. The disorder may involve (1) the form of language (phonology, morphology, syntax), (2) the content of language (semantics), and/or (3) the function of language in communication (pragmatics) in any combination.