What is Hearing Loss? 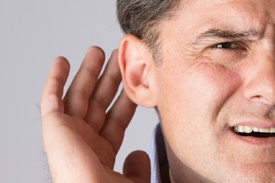 Impairments in hearing can happen in either frequency (the high or low pitch of a sound) or intensity (the volume of a sound), or both. For example, a person may not be able to hear very high-pitched noises like a whistle, or they may not be able to hear the TV unless the volume is turned up – or both. Hearing loss severity is based on how well a person can hear the frequency or intensities most often associated with speech. Severity can be described as mild, moderate, sever, or profound. Hearing loss can be congenital (occurring from the time of birth) or acquired (developing later in life after a period of normal hearing). Hearing loss can affect one or both ears – and in different degrees of severity in each ear. A loss that affects one ear is called a “unilateral” (one-sided) hearing loss. A loss that affects both ears is called a bilateral (two-sided) hearing loss.

In children, hearing loss can affect a child’s ability to learn to understand speech and language of others as well as the ability to speak. This is especially true if a child is born with a hearing loss, or loses his or her hearing before the age of two – the critical years of speech and language development. Children who are deaf from birth, or who develop significant hearing loss in these early years of development still learn to communicate, read, and write. There are many methods of communicating. Some people may use speech (sometimes called oral communication), some may use sign language (sometimes called manual communication), and some may use a combination of both.

In adults, the development of a hearing loss can be gradual or sudden. It may be associated with noise exposure (Noise Induced Hearing Loss – NIHL), the aging process, or to other medical issues. For example, hearing loss can result from certain types of chemotherapy or in relation to the onset of certain diseases such as Meniere’s disease. Adults with hearing loss can become isolated and withdrawn due to difficulty in communicating with others.