What is Language - and How Does It Develop? 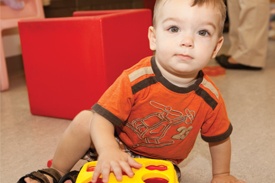 Language is the basis for all learning. Children first learn to communicate through eye contact, crying, vocalizing and gesturing. As they grow, they learn the language around them. Children then learn about their world through language by talking, playing and reading; parents and teachers use various forms of language to help children learn. Later, children learn about language as they grow older.

Language develops in a generally predictable manner. The brain is believed to be "prewired"  for learning language. As infants, children learn by listening. As they hear strings of sounds being used by others, they begin to decipher the meaningful units. They gradually understand more and more of what others say. This is often referred to as language comprehension or “receptive language.” Children also develop their ability to produce this language by first producing random sounds and then linking those sounds together to form meaningful words. Children usually produce their first true words around 12 months of age. This is often referred to as "expressive language."

Receptive and Expressive Language Development
Early in infancy, you will see signs that indicate that your child is hearing, listening and understanding what is going on around him/her. Your child is learning language long before he/she produces that first word!

There is a typical progression to language development. Initially, your child will turn to find sounds, follow with his/her eyes when something moves in their view, look at what you are looking at (joint attention). All of these skills are part of language development. Later, your child will respond by pointing or may get your attention by touching you or vocalizing.

Initially, children may gesture, point or look at things they want. Later, these gestures are paired with vocalizations and then with verbalizations (true words or word approximations). As your child becomes more verbal, the need for gestures and vocalization will fade. When a child does not develop words or the ability to produce words, behaviors such as gestures, vocalizations, grabbing or other behaviors may persist. After a certain age, this is no longer appropriate or expected.

For a checklist of hearing development milestones - click here.

For a checklist of speech development milestones - click here.