Can You Understand Your Child's Speech? 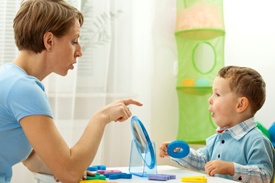 It’s common for most children to make some mistakes as they learn to say new words. Different sounds are mastered at different ages. Consistent, correct sound production will vary from child to child. When mistakes continue past a certain age, that’s when it's considered a speech sound disorder. Speech sound disorders include problems with articulation (pronouncing sounds correctly) and phonological processes (errors with sound patterns).

Can you understand what your child is saying? Does your child speak clearly? Do you have to translate your child's speech for others? This is called intelligibility. The term intelligibility refers to how much a listener can understand the speaker. In typical development, as your child learns to talk, his/her ability to be understood by those around them steadily increases.

Parents and close family members are usually experts at understanding their own child's speech attempts. Parents can "translate" even the most unintelligible efforts made by their children. Unfamiliar listeners, on the other hand, are often unable to decipher a young child's speech.

Here are some general guidelines:

Approximate age and percentage of speech understood by parents:

If you have questions or concerns about your child’s speech development, make an appointment for an evaluation with a Speech-Language Pathologist at Cleveland Hearing & Speech Center.