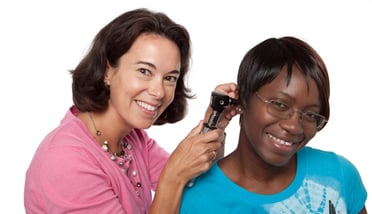 Earwax or cerumen (from the Latin word "cera” meaning wax) is a normal, natural, necessary substance produced by the human ear. It is a sticky golden-colored substance produced by the outer cartilaginous third of the ear canal and it contains naturally occurring proteins that inhibit fungal and bacterial growth and keeps the sensitive skin of the ear canal lubricated and healthy. Earwax also helps trap dust and dirt and other foreign objects from entering the ear.

For the average person, ear wax is NOT a problem.

Ears are self-cleaning. The ear canal is lined with fine hair that points outward that lets wax move to the opening of the ear canal with normal jaw movement that occurs when we talk and eat. It is fine to clean the outer ear with a washcloth, but other objects such as cotton swabs or “Q-tips” should never be inserted into the ear canal. These objects actually tend to push the wax back into the ear canal rather than bring it out and disturb the natural self-cleaning action of the ear. If ear wax gets pushed into the inner part of the ear canal, it is unlikely that it will ever come out on its own. That’s when you need to be seen by a health care or medical professional.

You may have seen ads online for special “home tools” to clean ear wax or proponents of “ear candling” (which involves placing and lighting a hollow candle in the ear canal which creates a suction that pulls ear wax out of the ear.) We do not recommend these (or bobby pins, tooth picks, paperclips…). Unfortunate things can happen. Burns, unnecessary suction or perforations of the ear drum, ear canal abrasions to name a few.

The most common problem caused by excess earwax is that it simply blocks health professionals from having a clear view when trying to inspect the ear. Senior citizens also tend to have earwax that is less liquid and is therefore more likely to build up in the ear. Additionally, some older males can begin to grow hair in the ear canal that acts as a trap for wax.

People with impacted ear wax can report a variety of different problems - a blocked feeling, reduced hearing, an off-balance sensation, their own voice is perceived as if talking in a tunnel, itchiness, poor hearing aid performance, or that their hearing aid “whistles”.

A build-up of cerumen can also pose special concerns for people who wear hearing aids – and people who use hearing aids do have a tendency to experience earwax build-up more than non-aid wearers. Every hearing aid has a part that is worn in the ear canal. Every time the hearing aid is inserted, the cerumen gets pushed in farther. Too much ear wax or wax in the wrong spot can block the smooth passage of sound through the ear and cause hearing aid acoustic feedback (a high pitch whistle) and make the hearing aid less efficient.

If you are experiencing any of the symptoms mentioned here, you may want to schedule an appointment with a CHSC Audiologist to exam your ears and your hearing to determine the cause of your problem.