Should My Child Learn a Second Language? 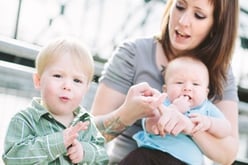 Introducing your child to multiple languages at a young age is a personal decision that can be challenging for many families. Children who become fluent in one language are referred to as “monolingual,” and children who become fluent in two languages are referred to as “bilingual.”  Speaking a language at home that is different than what your child may be exposed to at school and in the community can spark several questions such as “Will it be difficult for my child to learn another language?” “When should I start to teach my child two languages?” “How can I help my child learn a second language if I don’t know it myself?”

A child can learn two languages simultaneously from birth if they are both spoken regularly in the home. Most children speak their first words by the time they are 1-year-old. By the age of two, most children can use two-word phrases. Bilingual children are comparable to monolingual children in the age at which they achieve basic milestones of language development, including production of first word, production of first two-word combination, and achievement of a 50-word vocabulary. With adequate exposure to two languages, your child may begin to use words and phrases in one or both languages. If your child tends to show a preference for one language over another, that’s ok! Let your child explore new vocabulary in one language, while reminding them of the corresponding word in the other language.

After your child has begun learning both languages, give your child many chances to hear and practice new vocabulary words, exclamations, and sentences in each language. The more your child hears a variety of words and sentence structures, the more likely they will begin to understand their meaning. From time to time, children may mix grammar rules. They might use words from both languages in the same sentence. This is normal while learning two languages, and if you’re familiar with both languages yourself, you can help shape your child’s productions by repeating the sentence using correct grammar.

Being bilingual will not cause or worsen speech or language problems. Expert advice reveals no evidence linking bilingualism to language delay. However, if your child starts having trouble in both languages, he or she may need help from a speech-language pathologist (SLP).