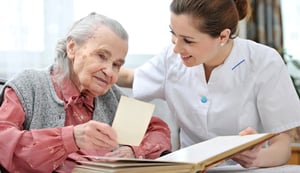 Aphasia is a language disorder resulting from an injury to the brain, such as stroke or head trauma. Aphasia involves varying degrees of communication difficulties in these areas:

Other communication issues include dysarthria (e.g., slurred speech which is often accompanied by facial weakness) or apraxia of speech (e.g., difficulty imitating sounds and words and making voluntary movements necessary to produce speech when there is no paralysis or weakness of speech muscles).

The outcome of aphasia varies significantly from person to person. The most predictive indicator of long-term recovery is initial aphasia severity, along with the lesion site (location of damage to the brain) and the size of the lesion. Other predictors of long-term recovery include age, gender, and education level.  Factors that may negatively affect improvement include post-stroke depression and social isolation.

*It is estimated that there are 180,000 new cases of aphasia per year in the United States according to the 2015 report from the National Institute on Deafness and Other Communication Disorders.

*It is also estimated that approximately 1 million people, or 1 in 250 in the United States today, are living with aphasia.

*Aphasia after stroke is more common for older adults than younger adults.

Speech and language therapy helps to improve the person's ability to communicate by restoring as much language as possible, and teaching how to compensate for lost language skills and finding other methods of communicating. Some studies have found that therapy is most effective when it begins soon after brain injury. Group speech-language therapy for those with aphasia is another way to practice their communication skills in a safe environment. Participants can practice initiating conversations, speaking in turn, clarifying misunderstandings and fixing conversations that have been completely broken down.

Tips to help people with aphasia:

Northeast Ohio Adults Communicating Together (NEO-ACT) is a one-of-a-kind program developed by Cleveland Hearing & Speech Center for adults with communication disorders related to stroke, injury or illness. The program is designed to provide individuals with communication difficulties (and their caregivers) an opportunity to improve quality of life through participation in activities that provide enrichment for listening, speaking, reading, writing, and socialization.

For caregiver tips and information visit our blog Daily Victories.